A message from FemAnonFatal.

For Far too long we were made to stand behind the backs of those who thought they can control our voice.

That it was their place to tell us how to talk, what to wear and who to fuck, when and how to vote, what defines a woman and what is equality. They have never seen us as equals! They silenced us, defending themselves in a public eye and held panels to talk about our reproductive right and out bodies.

We raise the flag of our sisters around the world in solidarity with women who fought, who were prosecuted and died for us to have a voice today. For women who stand shoulder to shoulder at protests and rallies, who educate and support one another, who fight for equal pay and a right to choose, who understand the struggle of childcare and a choice of not having children. Who do not victimise but praise women’s courage to speak out, who listen, who fight, who are selfless and open-minded. For every girl and every woman around the world who knows the struggle of womanhood. Women who are being force into marriages, raped, harassed, women who live with trauma of genital mutilation. Women who are forbidden to make their own decision and are force fed lies about the existence of equality. Women who are being brainwashed by society to the point of becoming anti-feminist.

FemAnonFatal is a collective.

NOT an individual movement NOT a place for self promotion NOT a place for HATE BUT a place for SISTERHOOD It Is A place to Nurture The/A Revolution Let Us write A New Chapter in Herstroy Our Goal is One Voice to Unite Many - The Time Is NOW! 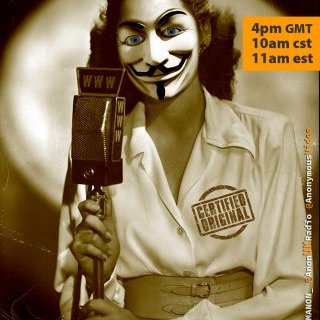 Courage is very proud to announce the launch of the CourageSound podcast, which will start this Friday 1 June with a discussion of the case of Reality Winner. CourageSound will broadcast every two weeks on Radio Vendetta, with archives made available to (...)

Welcome to + Autonomous Anonymous Network + and it’s voice + Radio Vendetta + For those who do not step back and watch the world burn. For those who see the bigger picture. For those who keep an ear close to the ground, heart open and leave ego at the (...)

FemAnonFatal talks for the first time

No HQ, no leaders or spokespeople. Just fight side by side to make an equal, fair, honest and peaceful society. FemAnonFatal, the “female soul” of Anonymous, talks for the first time about itself. Why it is born, which is its mission and its goals. (...)