> Civil Liberties in the Digital World >

Dmitry Bogatov was arrested April 6th on bogus charges and risks a 20 year sentence. Few have any doubts that Bogatov was arrested for simply running a Tor Exit Node from his home. Family, friends and his lawyer are asking for international help in protesting this horrible injustice as Dmitry remains in detention/jail.

What is he accused of?

The prosecution believes that Bogatov posted extremist materials in the internet. He is accused of part 2 of article 205.2 of Russian Criminal code (incitement of terrorist activities or justifying terrorism via the Internet), part 1 of article 30, part 1 of article 212 (arrangement of preparation of mass riots).

According to the case, somebody posted 2 messages on website sysadmins.ru on 29 March. Airat Bashirov accessed his account from 104 different IP adresses located in different countries, including Dmitry Bogatov’s IP address.

To substantiate the need of Bogatov’s arrest investigator pointed to video showing "mass riots and police disobedience". The only one video posted by Airat Bashirov is a music clip of hip-hop performers Kanye West and Jay-Z "No Church in The Wild". Need of arrest also was substantiated by the fact that Dmitry planned to visit Italy on 12 April. At that time Italy hosted International Esperanto Youth Festival, which Dmitry planned to visit beforehand with his wife.

Why is he innocent?

Dmitry Bogatov didn’t post messages in posting which he is accused of. He runned a Tor exit relay, which is not illegal in Russia, and he’s not charged with that.

Dmitry Bogatov was a operator of Tor exit relay. Tor is a special software which routes Internet traffic over random circuits builded from servers located around the world. Exit relays are used as last servers in circuit, that’s why their adresses appears in logs. Dmitry’s relay was online last time at 5 April 2017.

Airat Bashirov also used Tor network for posting messages for posting which Dmitry is accused. After Dmitry’s arrest, Airat Bashirov continue to post messages. News outlets "Open Russia" and "Mediazona" even got a chance to speak with him. In a comment to the Mediazona he confirmed that he used Tor.

At the time when Bashirov’s messages were posted Dmitry was not at home. He went to a fitness club with his wife, after which he visited a product store. That’s confirmed by CCTV footage.

#FreeBogatov would like to see protests all over the world. 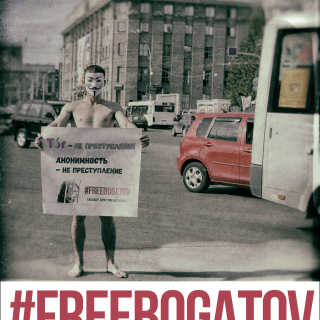 Civil Liberties in the Digital World

Security Alert: Sextortion is on the rise

January 21, 2019. The latest report from cybersecurity company Symantec shows that extortion scams are on the rise. The company blocked almost 300 million emails of this type in the first five months of 2019. The time-tested scams are making a comeback (...)

Why the NordVPN network is safe

Information has recently surfaced about a NordVPN breach caused by vulnerabilities in a third-party datacenter. Here are the key facts about the NordVPN breach situation: One server was affected in March 2018 in Finland. The rest of our service was not (...)

This email is the first of several in Riseup’s fall fundraising drive, where every donation carries other Riseup users with you. We wouldn’t exist without you, so please donate if you can. It could be a recurrin donation of $10, one dollar, or tens of (...)