SeaWorld ! This one’s for you.

Pressure has been mounting on you since the activist documentary Blackfish was released earlier in the year. Since then, your true nature has become apparent.Even your own investors are fleeing in the hundreds as your company crashes day after day on the New York Stock Exchange. The most loyal of your share holders have encountered a 51% loss in value and we will take the rest!

SeaWorld - You are the walking dead.

We’ve already done the dissection! Here is the autopsy. You died because:

Your history of secretive abuse is now known. Your lies and cheap misdirection marketing tricks will no longer be possible. Your ability to trick the public will be destroyed. We will remove it!

Continuing to attempt any profitable venture in it’s current form is now futile.

Anonymous has been looking with growing interest and you now have our attention. We recently learned that your dwindling attendance in US parks has spurned you to expansion abroad.

We will be there, fighting you on every battle front to stop this from happening. And once the time comes to empty the tanks we will be watching and making sure you do the job right.

Enjoy your funeral, because it is too late to expect us. 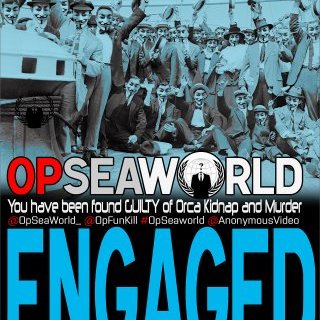