As many of you are aware, a fundraiser was mounted last year by JackalAnon, the founder and former admin of YourAnonNews, with an inital goal of just $2,000.00, which was intended to fund a server for a website he hoped to build. However, the Indiegogo campaign far exceeded expectations, and an unexpected $54,668 was ultimately raised – though Jackal received less than this after Indiegogo service fees (approx 4%) and credit card fees (approx 3%) were deducted [specific deductions as yet unknown].

After the funds were transferred from Indiegogo to Jackal, all the merchandise was produced and paid for. Other expenses were also incurred to support the intended goal of the fundraising drive. Though we are awaiting final numbers, the items below are among the expenses paid for in full by Jackal.

Despite the fact that all the merchandise was produced and paid for, it became apparent that very little of it had actually been mailed out. After several months without further progress, which prompted questions from YourAnonNews contributors, those who had placed orders, and the wider community, it became obvious that something had gone awry.

Wanting to protect and preserve this invaluable resource for the benefit of Anonymous and the wider activist community who support us and rely on us as to amplify their voices, a rescue plan was put in place by a collective that came together from various corners of our hive. We approached Jackal, who was under considerable duress, and offered to solve the mailout – and by extension credibility issue – on condition that he would relinquish control of the Twitter feed to a suitable protected entity. The password was subsequently passed on to DellCam and Emmi, after which Dell changed the password and had the only access.

A private round of fundraising was undertaken in October and November, and thanks to an incredible effort by YAN’s Denver crew, all the merchandise was packed and shipped before Christmas.

Having patched the immediate hole in our vessel, we wanted to find it a safe harbor. We felt that since so many members of our community across America and around the world – both free and incarcerated – had contributed to YAN, that it should never again be entrusted to a single individual. We therefore decided the best course of action was to form a non-profit that would hold all that is tangibly YAN essentially in trust. 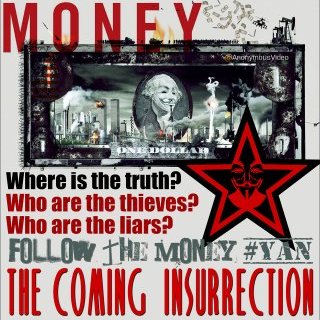 YourAnonNews - One fight: How to Make Money? Fuck the Traitors!

About YourAnonNews, their IndieGoGo campaign