United against all abuse and paedophiles

#OpUnited Call to Arms for Anonymous in Solidarity with Abuse Victims.

Greeting Citizens of the World. We have had requests from several child sex abuse victims, abuse advocates & campaigners asking Anonymous to join forces with them in a street protest against child sex abuse, CSAInquiry delays, cover ups and the lack of legal action against all types of abusers.

This is a call to arms to all of AnonFamily to show solidarity with victims and help to support this demonstration against abuse in any way you can.

From Sex Abuse victims, to those abused and neglected because they are disabled, old, mentally afflicted, and vulnerable in and way shape or form, it is time for the UK to rise up and say no more!

Generations of victims have seen no justice for their unimaginable sufferings. It is time to raise your voice for victims now so that our next generations are neither abused nor silenced.

You can support #OpUnited by attending the protest, encouraging your friends and family to attend. Spreading this Operation link and information on child sex abuse via your social media accounts. Blogging or publishing via media sources about #OpUnited & the upcoming demonstration. Making and publishing art work & videos to inform the public about #OpUnited Livestreaming & taking photos at the #OpUnited demonstration.

It’s time to unleash the fury with feet on the streets! Whose Streets? Our Streets!

United against all abuse and paedophiles. No more abuse! 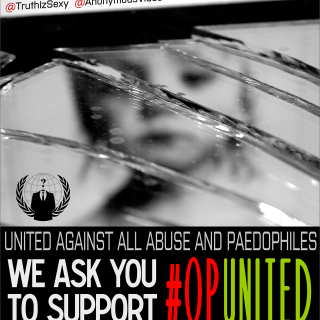