"I’ve spent a lot of time speaking around the world and typically what I do when I speak to groups whether it’s in New York City, or in Palestine or in Egypt before I got banned, or Israel before I got banned, or in Syria before I’m not sure which side is winning, I give my Salam Aleikums to everyone in the audience. Especially, I give my greetings to the snitchers, the FBI, the CIA, the LSD, and everyone else here."

"I don’t really give a fuck what you report. I really don’t, because I’m closer to the end than the beginning, and you know, you eat shit and die. Please make sure to tell the truth. Because the truth will set you fucking free, FBI. And I won’t call the president by his name. For those of you who follow me or know me, I call him "I have a drone." So, just tell the fucking truth and life will be okay."

"Now. Over the last month, I’ve been thinking about, ’What can I possibly say in front of such a wonderful collective of renowned activists, and lawyers, and speakers, and folks that have put their ass on the line?’ And I really had no idea, until about three weeks ago. And it really began to take shape, and it has taken shape the last few days, that ultimately, what Jeremy, what Barrett, what Bradley, what Snowden, what Assange, and what PayPal 14 is about, (whispers) it’s Egypt."

"It’s about Egypt. Think about it. Right now, in Egypt, whether you are Muslim, Jewish, Coptic Christian, French, an atheist, or a son-of-a-bitch, there is a government that is slaughtering people, by the thousands. And it began because people elected to say, ’No.’"

"And that’s why they’re so afraid of the so-called ’hackers,’ or the whistle blowers, or the truth speakers. That’s why they are so all fucked up over those people who say, ’Yeah, I’ll go to prison. Okay, but I’m gonna out you fuckers. I’m not going to let you keep the pearly wisdom to yourselves, because we don’t trust you. We do not believe you. We do not listen to you, we do not follow you.’ There’s an old saying I learned in law school, 137 years ago: ’In the marketplace of discourse the truth will always rise.’"

"Women and men who came—there was a point, there was a time, where there’s that little voice in the back of your mind, the back of your head that says, ’Do I really want to do this? Do I really want to be reckless? Because I know they’re going to catch me. They’re gonna catch me. They’re gonna catch me, they’re gonna grab me. It may take a week, it may take a month, it could take a year, because their industry is snitches and cooperators, and brutality, and persecution, and Eric Holder, who all the rest can kiss my ass, any politicians in this country, they will come for us. Every person."

"You gotta know it goin’ in. You gotta know it goin’ out. And when you stand in front of a federal judge, or a traffic court judge, it’s the same tired shit. But in the back of everyone’s mind, there’s that little voice that says, ’Hmmm.’ And we’re here to honor those people here tonight, who when they heard the voice said, ’Good talkin’ to you, I gotta go to work.’ And that’s what it’s about." Stanley Cohen Defending the individual against the state @AnonymousVideo 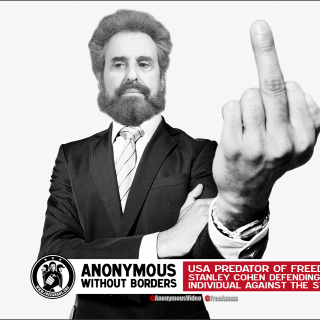