About Anonymous #OpDomesticTerrorism and battling fascism on and offline.

Greetings to the Citizens of Charlottesville.

It has come to our attention that the far-right, alt-right, and neo-nazi organizations have attempted to use your city as a rallying point to display their hatred and intolerance towards the people. You as citizens cannot allow these types of actions to go unpunished. Anonymous has taken steps to remove the websites of these far-right extremists under the banner of #OpDomesticTerrorism.

You’re not alone; Anonymous is the people, and the people is Anonymous.

Use the hashtag: #OpDomesticTerrorism, #OpAltRight to display our message of anti-fascism within your community; let these right wing extremists Anonymous is watching. 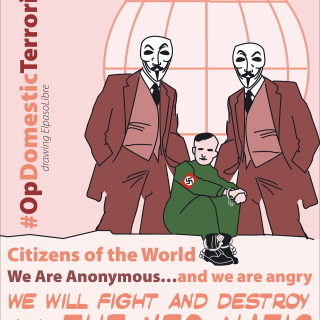