Letters of support for Jeremy Hammond

Join Us in Asking for Leniency in Jeremy’s Sentencing.

We are currently collecting letters of support to ask Judge Loretta Preska for leniency in sentencing. The deadline for submitting these letters is October 15, 2013. Thank you for your continued support!

Jeremy Hammond’s sentence is set for Friday, November 15 at 10am at the Federal District Court for the Southern District of New York. We are collecting letters of support on his behalf. Please submit your letter by October 15, 2013 so that it can be included in our submission to the Court. Please do not send your letter directly to the Court – it will not be read. Below is a suggested template for support letters (Attached documents).

To anyone incarcerated, a letter of support or just a friendly greeting can make an incalculable difference. Being imprisoned at all is monstrously isolating– and being in solitary confinement is exponentially more inhumane and alienating. Please, let Jeremy know his friends and supporters on the outside are thinking of him. You can brighten his day for only the cost of a stamp. 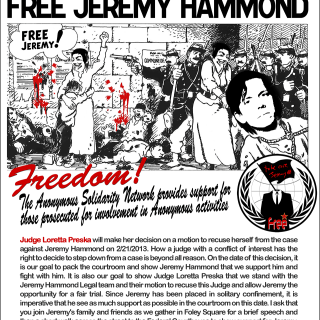 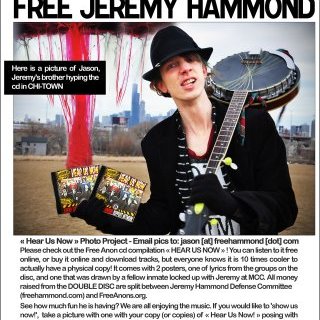 Jeremy Hammond Jail Support - Donations to his commissary fund are also appreciated. This fund will help support whistleblower Jeremy Hammond while he serves his 10-year prison sentence. Campaign to support arrested Anons # We Are FreeAnons

Template for letters of support for Jeremy Hammond (PDF - 55.3 kb)