On the date of this decision, it is our goal to pack the courtroom and show Jeremy Hammond that we support him and fight with him. It is also our goal to show Judge Loretta Preska that we stand with the Jeremy Hammond Legal team and their motion to recuse this Judge and allow Jeremy the opportunity for a fair trial.

Since Jeremy has been placed in solitary confinement, it is imperative that he see as much support as possible in the courtroom on this date. We ask that you join Jeremy’s family and friends as we gather in Foley Square for a brief speech and then a short walk across the street to the Federal Courthouse to show support for Jeremy.

These court hearings are the only chance Jeremy has to see his family, friends and supporters so it is vital that we attend this hearing. A press conference regarding the outcome of this motion will be held immediately following the hearing. 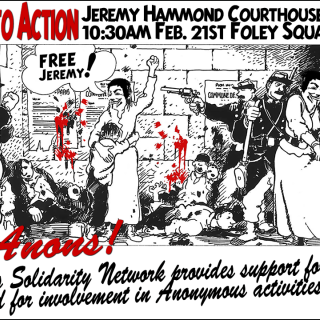