The Courage Foundation in support of Matt DeHart.

The FBI seized Matt’s computer together with every data storage device in the house — except for two hidden thumb drives, which he says contain Anonymous contact information, server logs from The Shell and leaked documents.

Later that year, DeHart was detained at the border when returning from college in Canada. There, Matt says he was tortured and intravenously drugged against his will. FBI records of his interrogation confirm that Matt was detained for “national security” reasons and questioned about his military unit, Anonymous, WikiLeaks and espionage. During his interrogation he was presented with a Criminal Complaint and Arrest Warrant for the solicitation of child pornography that had been filed in the afternoon after his morning detention at the border. According to Matt, the FBI told him they knew he was innocent of the charges.

Matt spent almost the next two years in various US jails while awaiting trial for the pornography charges. In 2012 a US judge, after reviewing classified FBI reports, expressed skepticism in open court over the government’s charges against Matt, and ordered that he be released on bond.

Matt then returned to Canada with his parents to seek asylum, but he again found himself in detention, and under questioning by the Canadian Security and Intelligence Service (CSIS) and the Canadian Border Services Agency (CBSA) Intelligence and War Crimes Division.

In February 2015 Canada denied Matt DeHart’s request for asylum, and on March 1, 2015 he was deported back to the US, where he is currently in federal custody.

Matt DeHart is in dire need of our support. Donating to Matt’s defense fund will help his lawyers to fight his corner and keep monitoring his condition to prevent him from experiencing further mistreatment in detention. 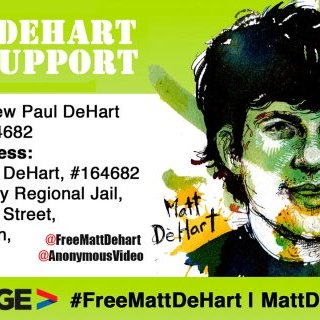 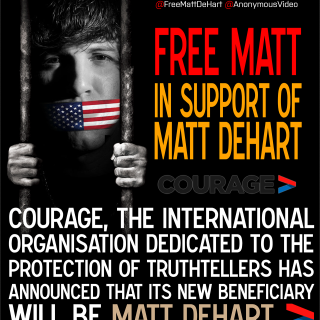