Anonymous #OpForest to save Net Neutrality

This is a battle for the future of the internet.

JULY 12TH: Internet-wide day of action to save Net Neutrality.

The FCC wants to destroy net neutrality and give big cable companies control over what we see and do online. If they get their way, they’ll allow widespread throttling, blocking, censorship, and extra fees. On July 12th, the Internet will come together to stop them.

Net neutrality is the basic principle that protects our free speech on the Internet.

"Title II" of the Communications Act is what provides the legal foundation for net neutrality and prevents Internet Service Providers like Comcast, Verizon, and AT&T from slowing down and blocking websites, or charging apps and sites extra fees to reach an audience (which they then pass along to consumers.)

Greetings, Citizens of the World, We are Anonymous.

On July 12th, 2017, internet users worldwide will gather in the streets to protest draconian cyber monitoring and control. Since as early as 2014 the issue of Net Neutrality became a major issue in public and political debates worldwide. HBO political talk-show host, John Oliver has brought this issue to the forefront of the minds of activists and in doing so has given the cause a voice we can not allow to be silenced.

Over-reaching political leaders and their allies in classified international agencies are moving faster than ever in the history of cyber dictatorship, to censor and manipulate the usage and access granted to any user on the internet. They do this not only for themselves but for the financial gain of their supporting industries. Data brokering and Federal Surveillance are but two of many terrifyingly specific methods of manipulating the content citizens of the world are allowed to access and edit. This level of observation and control is unprecedented and is a complete affront to freedom and guidelines set forth in the Universal Declaration of Human Rights.

When our Internet Service Providers have a monopoly on our access to unbiased and uncensored information and their motivation becomes financial, free and open information becomes a casualty. The ability to choose which services and sources you wish to employ becomes a thing of the past. As a result, a dystopian state in which governments and corporations control what you think, do and buy is rapidly becoming the future.

At the of the time of this video’s release there are confirmed acts of civil disobedience planned in many major cities across the United States. There are boots coordinating on the ground in Ottawa and London, ready to mobilize and fight for your rights as free people. This is not enough. Any individual, regardless of nationality, regardless of internet usage who accesses the internet for any purpose needs to educate themselves on what we as citizens stand to lose when net neutrality is in jeopardy.

We are calling on activists and citizens of the world alike in every city of every nation to step up and rally together in the face of surveillance and censorship of the one free and open resource to information we have. Inform your friends, your family, your coworkers.

There is no act of defiance too small or too risky.

The free internet must be defended at all costs. Information needs to be free and accessible to all, not dictated by the whim of cable company lobbyists or controlled by petty financial desires.

Join Anonymous on July 12th around the world to protest the censoring of the internet by the acts of net neutrality and government surveillance. Fill the streets with your presence and drown the FCC comment board with your voice. Write letters and make phone calls to politicians. Tell then why they must change course, and do so with passion. 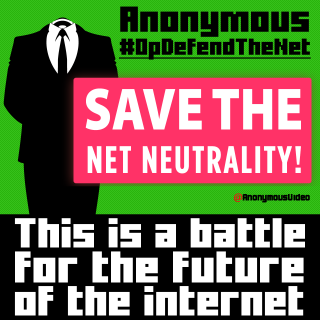 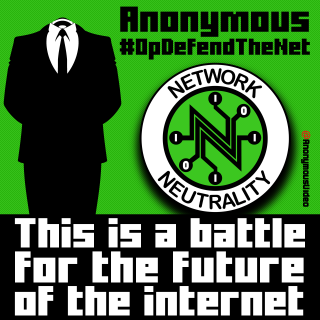