Greetings people of the world,

Recently the government of Saudi Arabia has taken it upon themselves to indiscriminately bomb the Yemenis people. The Saudi Arabian government has continued to commit such atrocities while world leader look the other way.

This conflict has which has its roots in the failed political transition, has caused more then 7,600 to lose their lives and millions of citizens displaced while being pushed to the brink of famine. Iran, Saudi Arabia and eight other countries have begun an air campaign with no end in sight. This is no longer acceptable.

To the Yemenis people,

Anonymous stands with you in this fight for your basic human rights and liberties. No longer will your voices be drowned out by the constant bombardment which is being supplied by the Saudi Arabian government. We, the Anonymous collective, will work tirelessly day and night to ensure you acquire the freedom and democracy every human being deserves.

To the government of Saudi Arabia, you feel the wrath of Anonymous.

We have already begun removing your websites from the internet and dumping the private information which belong to the Saudi Arabian government. No longer will the people of the world tolerate such horrific acts. Anonymous will make sure of this.

Your silence is complicity. It is our duty as free people of the international community to oppose violent regimes, regardless of your political affiliation. 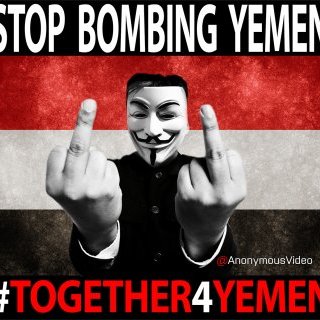