Greetings to Vladimir Putin and the people of Russia.

We in Anonymous have watched the behavior of the Russian Federation with growing alarm as you have descended into tyranny and brutality that appears to all intents and purposes to be the action of common street thugs.

As the host of the 2014 Sochi games, the eyes of the world have been upon you in recent months, and Russia has certainly disappointed the world under this scrutiny as you murdered stray animals by the hundreds, flaunted your despicable corruption, and brutalized (and even murdered) foreign workers at the hands of the police for the unspeakable crime of demanding the money they had been promised in payment for their labor as they constructed the Olympic compound. To make matters worse, thousands of men and women were forced from their homes at gunpoint by the military, without even being given time to pack, only to watch their dwellings as they were torn down to make way for lodgings and arenas for the Olympic games.

This is to say nothing of the shocking and disturbing intolerance you have displayed towards gays, lesbians, and transgendered people as you have beaten and imprisoned them for being who they are. You even turned a blind eye to the hate crimes inflicted upon them by criminals in your society; your assurances to the gays and lesbians of the world coming to visit your country for the games that they would be safe as long as they “stay away from children” is laughable and insulting.

Furthermore, your embrace of Eastern Orthodox supremacy threatens to return Russia to the days of the Czarist pogroms against the Jews, as they were dragged from their homes and murdered in the dead of night, all because they were different. All in the name of “traditional values”.

These are merely a handful of examples from what is a shockingly long laundry list of civil rights abuses, and a persistent and pervasive pattern of tyrannical behavior.

Mr. Putin, your sixteen years in the KGB has certainly prepared you for this sort of boorish, criminal behavior, and we have come to expect little else from Russia in recent years, but your overnight invasion of the Crimea and the Ukraine has crossed a line that we cannot allow you to cross. You have invaded a sovereign nation in the name of Russian hegemony, and threatened peace and stability in the region with your actions. 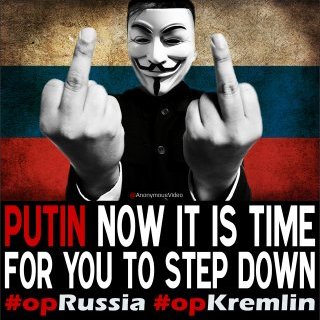